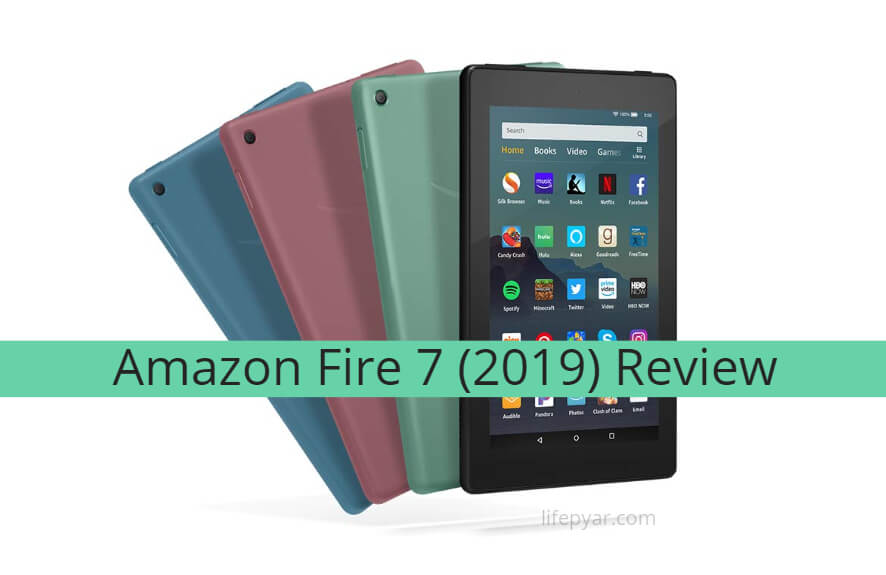 Fire 7 Tablet by Amazon was first released in 2015 which was the lowest priced Amazon Tablet (US$ 49.9). Micro SD card slot was first introduced as external storage in this fifth generation tablet.

In 2017, Fire 7 (Seventh Generation) was released with minimal improvement. And now, the Amazon Fire 7 (9th Generation) is gonna be released on June 2019 with two editions – Normal and Kids Edition.

Amazon Fire 7 Kids edition is specially made for kids with thousands of books, apps, games, audiobooks, etc., It costs twice the price of Standard edition (US$ 99.9). The Fire 7 (2019) tablet comes only in Black colour with Blue/Pink/Purple cases. The Kids edition offers some special features like

Note: Specifications of Fire 7 Kids Edition are the same as the Standard edition.

1.3GHz quad-core processor powers Fire 7 which are the same as the 2017 model. The performance has not changed much because it has the same specifications as the previous model. There is a little lag while playing games, and the loading time is a bit longer. It comes with a single mono speaker which is a slight disadvantage in sound quality. It weighs lesser than the other Amazon tablets.

Amazon Fire HD 8 has the same processor but with 1.5GB Ram which makes the performance little higher than Fire 7 tablet.

Fire 7 tablet is the cheapest among the Amazon tablets which cost around 50 US dollars. It is made of matte plastic and comes in four different colors – Black, Plum, Sage, Twilight Blue. It has a 7″ inch display with 1024 x 600 resolution and IPS technology. But the picture quality could have been better. And you can’t expect more in such a low budget tablet.

The Storage capacity has been increased compared with the previous models. It comes with 16GB or 32GB internal storage and expandable storage using micro SD card up to 512GB.

It features 2-megapixel front and rear camera where the video recording quality has been upgraded from 480p to 720p. It’s good to have a camera to make video calls rather than having none.

Note: Battery capacity is not mentioned by Amazon

Fire 7 (2019) comes with Hands-free Alexa feature, which is included only on this model. With in-built Alexa, you can now unlock your device by just calling “Alexa“. You can also use Alexa to make calls, send messages, open apps, find weather conditions (Example: By asking “what’s the weather now”, you can find out the weather conditions and temperature). It works the same way on Amazon Fire HD 8 and 10.

Amazon Fire 7 runs on Fire OS (a branched version of Android). It comes with the Amazon App Store to download apps like Facebook, Netflix, Messenger, Instagram, etc., The Major problem with Amazon Appstore is that you can’t download all apps that are found in Google Play Store. You can’t find YouTube on Amazon App Store as it has been not released till date and it can be expected this year.

Buying Amazon Fire 7 (2019) is not a bad choice, it has great features at its price point. Those who prefer for a larger screen and a better performance can opt for Amazon Fire HD 8 or 10.

Stayed connected for more reviews. If you have any queries or to mention any products for review, please comment us below.