Take a look at the Best Handwriting in the World 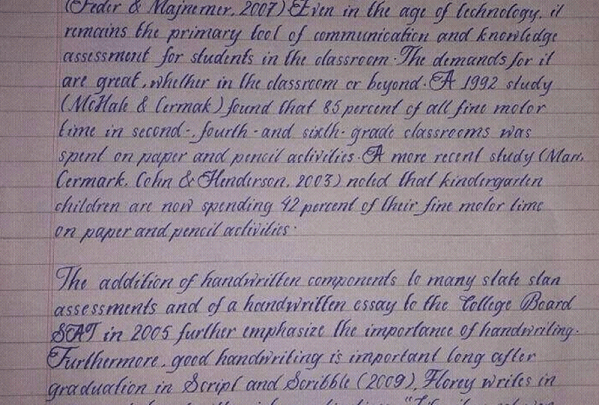 Handwriting is a beautiful art. It is an art that is very important and is still prevalent in schools. Over the years, Handwriting has been dying due to advancement in technologies, the use of smartphones, emails, paperless work, emoticons, and our thoughts are communicated through typing and scrolling our fingers on the screens. Thus, making handwriting now limited to classrooms these days.

Prakriti Malla has the Best Handwriting in the World

Prakriti Malla, a 14year old girl from Nepal is doing wonders and has been recognised by the Nepal government to have the most beautiful handwriting in the world. Prakriti was in her 8th-grade student when she stole the limelight and went viral on social media over her unbelievably beautiful handwriting. Her fonts are an eye-catcher. With the perfect spacing between fonts and beautiful curves, it’ll make you wonder if one could actually write that way. It’s also said that people have suggested adopting her handwriting as an official font by Microsoft.

Good handwriting is such a pleasant reading experience. Malla mentions that “handwriting is an essential skill for both children and adults”, her sayings have been circulated all around Facebook, Twitter and other platforms. One person also tweeted that Malla’s handwriting reminds him of his father’s writing who would have been 101 now and that’s the way kids were taught handwriting in schools years ago.

Learn More about other Best things in the world here.

“Furthermore, having good handwriting is always important even long after graduation,” Malla adds.