How to Cast Media from Linux to TV using Chromecast 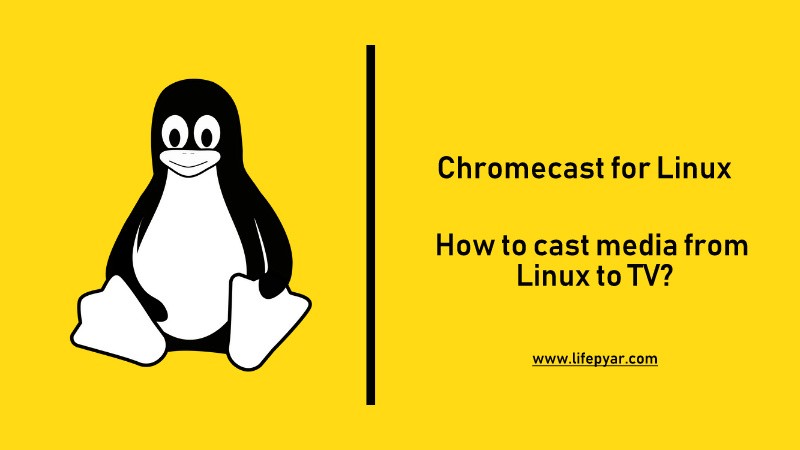 Chromecast by Google is the most popular and affordable media player tool ever since its launch. It can be used for all your home entertainment needs when it is plugged into the HDMI port of any smart TV. Anyone can cast videos from different platforms like Android, iOS, and Windows/Mac PC. However, those Linux PC users have no direct way to cast content to the Chromecast-supported television. In other words, Chromecast for Linux PC is a bit tricky task. But casting videos to smart TV from Linux PC support can be used if you have Mkchromecast. In addition, you can also use Google Chrome or VLC Media player to cast the content. All the possible ways to Cast Media from Linux to Chromecast are listed in this article.

Cast Media from Linux to Chromecast

There are three ways to cast content from Linux to Chromecast-connected TV. They are listed below.

VLC is a popular media player that is compatible with various devices such as Firestick, Android, iOS, etc. If you are a Linux user, you can use VLC to cast content from your PC to any Smart TV. Before following the steps given below, make sure to set up the Chromecast device with your TV.

1. Connect the Chromecast-connected TV and the Linux PC to the same Wi-Fi network.

2. Open a browser on your Linux PC.

3. Go to the official website of VLC Media Player and install it on your PC.

4. Open the app after installation and play any content on the VLC player.

5. Tap the Playback tab at the top.

7. From the list of devices, select your Chromecast device name.

8. That’s it. you can see the video on the Chromecast-connected TV.

How to Cast Media from Linux to Chromecast using Google Chrome

1. Launch the Google Chrome browser on your Linux PC.

2. Visit the website or play any video on the browser.

3. Tap the three-dots icon located in the top-right corner.

6. Then, hit the option Cast tab displayed under the Sources drop-down. If you want to cast the entire desktop, tap Cast Desktop.

7. Within seconds, you will be able to see the video or the website on Chromecast-connected TV.

How to Cast Video from Linux to Chromecast using Mkchromecast

With the Mkchromecast program, you will be able to easily cast media contents like audio and video from Linux/Mac PC to the Google Chromecast device. Above all, those Linux PC users should have Debian or Ubuntu repositories to download Mkchromecast to cast to Chromecast.

Follow the guidelines carefully to cast video from your Ubuntu to Chromecast.

Important Note: Make sure you have quit the tray applet just before casting a video on the Chromecast device.

##. Initially, you should open a new Terminal window on your Linux PC and enter the command

##. To process the video, you can specify a backend by entering the following command

##. To cast any video with subtitles, you should enter the command as

##. Enter the command given below to cast any video file from an online source

##. YouTube videos can be cast to smart TV with Chromecast support if you enter the following command

##. To download Mkchromecast as a deb package file, click on the link or install it by using the command as

Note:
$VERSION = X.Y.Z-Rev. For instance, 0.3.7-1
When there are no dependencies, then enter the command as
sudo apt-get -f install

##. In addition to the above commands, you can install Mkchromecast from Github too by cloning the repository as

Those who have installed the Debian package can, therefore, use the following command to cast any video to Google cast devices.

##. To play any source URLs, use the command as,

##. By using the following command, you can play YouTube URL’s on Google Cast devices

1. Can you cast video from Linux PC to Chromecast?

Yes. You can use VLC, Chrome, or Mkchromecast to cast video from Linux PC to Chromecast.

2. How to cast video using VLC Media Player on the Linux computer?

To cast, follow the steps given below.
Play any video >> Click the Playback tab >> Select Renderer >> Tap your Chromecast device. To know more about the steps, refer to the blog.