How to Watch NFL on Amazon Firestick 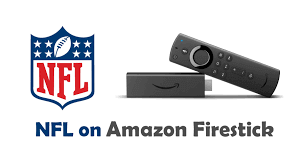 Firestick is a home entertainment streaming device that is plugged into the HDMI port on your smart TV. NFL is the best app for streaming Football matches. If you wish to watch football matches on your TV, Amazon Firestick is the best choice. Watching the NFL through cable and other websites is costlier. You can install the NFL app on Amazon Firestick and start streaming live NFL events and enjoy on-demand on Firestick. It is possible through some of the free streaming apps available on this platform. In the article, we list out some of the free streaming Firestick apps that allow you to watch NFL events.

There are very few apps that stream NFL matches on Firestick. Some of these apps are free and some need payments to stream.

Read: How to Install Mobdro on Firestick?

Sling TV is an online streaming app. It offers a list of channels under various categories, based on the subscription. It allows the user to watch football matches shown by NBC, FOX, ESPN, and ABC channels. You have to pay for these channel package to access.

Hulu is the live TV streaming app. You can access the live TV broadcast on sports channels including ESPN, NBC, FOX, and CBS with the Hulu+Live tv subscription. It offers a bunch of football content as part of the price. Users can easily access the Hulu TV on Firestick through the Hulu app.

Read: How to install cCloud TV Kodi Addon in 2 Minutes?

cCloud TV Kodi addon allows the user to watch so many live channels. It allows you to watch major live sports worldwide. Here you can always find NFL game links under Live Sports to Stream it on firestick.

SportsDevil is one of the most familiar third-party Kodi addons for live streaming of sports events without any cost. The best part of the SportsDevil addon is you can catch live stream and on-demand videos in different picture quality formats including 720p and 1080p.

In this article, we covered a wide range of free and paid streaming NFL games on Firestick. NFL on Amazon Firestick is used by most of the football fans who wish to watch on live. The user can also watch on-demand events at any time wherever in the globe.